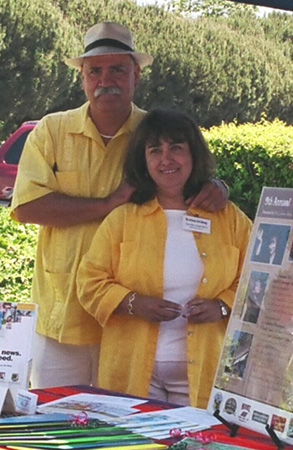 Most of us are passionate about one thing or another. For many of us, this passion is expressed as an interest that we nurture in our spare time or maybe we keep this passion alive in a subtle way and not bring it out full-force until our later years, maybe after retirement. Many of us are "realistic" and focus our time and energy in earning a living, to pay our bills, to acquire things, to tow the company line. I am one of these people, I have a good job and I love my job. And I also have a passion - a passion for and a love of music. I used to play the piano and I played it very well. Over the years, my various careers and dedication to my profession and to my employer became the focus of my time and energy and the piano was put aside. I have always found it difficult to express to others what music does to me because for me, music is spiritual. The words by Charles Hart in Music of the Night come closest to describing this feeling. Let me paraphrase his lyrics:

Softly, deftly, music shall caress you
Hear it, feel it secretly possess you
Open up your mind, let your fantasies unwind
In [your mind] you know you cannot fight
[This] love [for] the music

Every once in a while music and what it does to my soul re-surfaces and hits my inner being BUT, I would put it aside - I have no time - I have a busy career teaching at Oxnard College and being involved in college governance.

But this is not so with Latino Town Hall's Cultural Arts Award recipient Xavier Montes. Years ago, he made the conscious decision to eschew working at a "traditional job". He chose to devote himself to sharing his culture - specifically Mexican and Latino culture as expressed in art, music and dance. He chose to sacrifice personal wealth; he chose to live a simple life; he chose to devote himself to the promulgation of his culture. But this devotion to Latino culture was dormant in Xavier in his growing up years and it did not surface and take hold of him until his college years first at Moorpark College and then at UCSB where it finally won him over. Where as he puts it, his transformation was complete. While at UCSB he learned to play the harp. He met and worked with Javier Gomez when Javier [with a "J"] first created the Teatro Ilaketch and our Xavier [with an "X"] performed musically as well as acted and danced in a variety of musicals. Both at Moorpark and at UCSB when he would attend a variety of musical and dance performances or attend art exhibits and shows, he would ask himself: Why isn't this available in Santa Paula? Why aren't these professional musicos coming to my hometown so that others, especially young people can hear them - see them and be inspired as I am?

Close your eyes for your eyes will only tell the truth
And the truth isn't what you want to see
In the dark it is easy to pretend
That the truth is what it ought to be!

As Xavier closed his eyes and contemplated the truth - it was clear to him, that if the best in Latino art, music and dance was to come to Santa Paula, he would have to work to bring it here. So, after graduation from UCSB with a Bachelor of Arts degree in Studio Art and a teaching credential he came back home, to take care of his beloved Tía who was slowing dying from Alzheimer's Disease and to work by using his passion for Latino culture to bring art, music and dance here to Santa Paula.

Xavier's journey continued. Through art, he created beautiful visual expressions of the culture he so loves. He formed various musical groups that performed throughout Santa Barbara and Ventura Counties. He took time out to travel to Cuernavaca in Mexico to study folklorico dance at the Instituto de Bellas Artes. He had a family, a son, Robert and a daughter, Anica. He volunteered as a lecturer, teacher and performer and used these opportunities to expose his audiences to Latino culture.

Xavier has a wide extensive collection of Mexican and Latino music including Salsa music. A variety that covers a wide range of musical genre. Knowing this, KCSB-FM radio in Santa Barbara invited him to host - at no compensation - a 2-hour weekly radio show, entitled "The Big X Show", where he could share his personal music collection and again used this opportunity to share with his audience his knowledge and love of the Latino culture. This show continued for four years, and only stopped when his Tía became so ill he had to stay near home to take care of her. And finally in 1994, he created the De Colores Art Group - an organization (although the organization was really only one person, Xavier) that would put on the first Latino themed art show in Ventura County, the De Colores Art Show. And you all know what has happened to that one-day art show held for the first four years at the Railroad Depot!

Last year in May, Xavier took me to Olvera Street to an Encuentro de Jaraneros, a fandango. As we stood there looking up at the Olvera Gazebo listening to the vibrant sounds of jarocho music - the music of Veracruz, I noticed an odd expression in his face. "Oh-Oh" I told myself. "We have a gazebo in Santa Paula", he said to me. "Yes", I replied apprehensively. "We could do this - bring a fandango to Santa Paula". "Aha", I said weakly. "You want to do it?" he said with a look of determination that you all know so well. "OK then, let's do it". So, there you have it, we had no money in the De Colores bank account, no committees - no volunteers - BUT why should that stop Xavier. We didn't have those things either for the De Colores Art Show so why should the fandango be any different. Xavier Montes was going to bring a fandango to Santa Paula and we would just have to do what we always do, work our butts off to make it happen! And three months later, a couple of thousand people accepted his invitation to come to his beautiful Santa Paula to the first ever public fandango in Ventura County. Old-timer jaraneros said that ours was the best attended public fandango in California in their collective memory!

In a nutshell, that is who this man is - Xavier Montes is a driven man - a man with a mission and a vision - his mission to bring the beauty and diversity of the Latino culture to his hometown; the vision that others will know "You want Latino Culture - come to Santa Paula!" His nomination information said, that Xavier's

"community service work benefits not only Santa Paula but also Ventura County and all of Southern California . . . We are fortunate to have him in our city and county working with such love and dedication for our people."